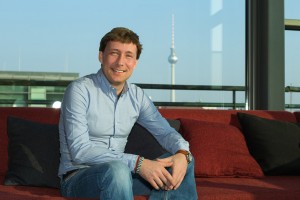 He has worked for ABN and ING, among others, and was even an entrepreneur in the banking world for a while. Niels Turfboer is now Managing Director at Spotcap, the internationally-operating online credit platform, and is involved in rolling out Spotcap in the UK.

What is Spotcap exactly?
“We were founded in September, 2014, so we’ve just celebrated our first anniversary. In short, Spotcap is a credit provider that uses its own money to provide SMEs and the self-employed with business credit up to a maximum of €100,000, for a maximum of one year. Unlike other credit providers, we use a lot of new and smart technology which makes applying for a loan easier, faster and more customer-friendly. Although our Head Office is in Berlin, Spotcap operates in Australia, Spain and the Benelux countries. We will also be active in the UK from 2016, for which I will also be responsible.

So far we have granted 4.5 million loans in the Netherlands and 14 million worldwide. Nice to add here that whereas we began in the Netherlands in March of this year with 250,000 loans, now, only 8 months later, we are granting more than a million a month. That’s a growth of 400%!”

What developments are you seeing in the market?
“The fintech market in the Netherlands is maturing quickly. We are still behind the United Kingdom and the United States, but our country is growing rapidly in the fields of alternative financing and fintech. Applying that question to Spotcap, we see that our granted loans are mainly used for hiring extra personnel, purchasing or expanding stock, or setting up marketing campaigns. If a company wants to offer a new service or a new product, for example, it is useful to have working-capital financing to be able to employ a new Sales Manager.”

Can you see any differences in the different Spotcap locations?
“Despite the world getting smaller, there are a great many differences, mainly cultural. For example, the Dutch have a good payment mentality but prefer to pay low interest. You could say they are more vocal and critical. People in Spain, on the other hand, are willing to pay more but do so slower and less strictly than the Dutch.

There are even cultural differences within our company as we have about twenty different nationalities in the Spotcap team. We have people not only from Austria, France, the Netherlands, Spain and Germany, but also from Eastern Europe, Chile, India and Australia. Sometimes this cultural diversity leads to miscommunication, but far more often it is exactly that mix of different backgrounds that leads to better insights. And that is real added value for the company!”