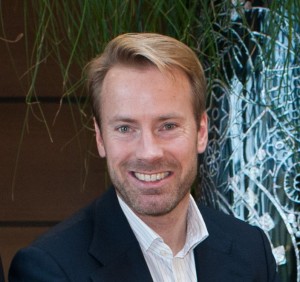 iDEAL, premium pension institutions and an increasingly cash-free society. Where is the Netherlands in relation to other countries in regard to fintech? What opportunities are government and businesses missing? And what can we expect from fintech in the coming years?

Don Ginsel, CEO and founder of Holland FinTech, says that it is difficult to answer the question of whether the Netherlands is a forerunner in the field of fintech. “Fintech is much too diverse for that. Compare it to a triathlon: one competitor is good in swimming, another in cycling and yet another in running”, explains Ginsel.  “A generic answer would be yes, we’re up there with the global leaders.”

That is indeed extremely general. In which area does the Netherlands stand out?
“The Dutch payment system is exceptionally well developed. The Germans still swear by cash, and cheques are still used in France and England.  There are many places in Amsterdam where you pay with bitcoin. The conditions for future success in the field of fintech are also very promising in the Netherlands; a well-educated population that’s creative and can work well in co-operation. We have faith in our institutions and we’re open to digital innovations for which we’d happily surrender information.”

Does our Faith in institutions also explain the success of iDEAL?
“The success of iDEAL is mainly due to the compact banking industry. The large banks saw a mutual threat (Visa and Mastercard), so they were willing to work together. iDEAL is of course a good solution, but it is seen too much as something Dutch and therefore it’s not really accepted in Europe. It is one of our fintech successes, besides premium pension institutions, which is a totally different initiative that is far more on the legal side. A Brand New Day, just like Bright, is very closely linked to the Dutch market. We see different initiatives in each country because the pension market is subject to local legislation.”

Where are we missing opportunities?
“The government could be more active. Unlike England and the United States, our government is not yet so involved in financial innovations. There has been a sort of shell-shock here since the financial crisis; politicians have trouble with financial innovation and a negative view of the sector as a whole.  But we really have to shape the economic infrastructure of the future together because the economy in general will be much stronger for it.”

“It is not in our nature to blow our own horns, but perhaps we should be less modest”

Who should we look to as an example?
“The British. Because their economy is to a large extent dependent on the financial world, they quickly focused on fintech. The government and legislative bodies opened the doors for innovations in the financial sector. That is also why fintech initiatives and incubators are concentrated there. London presents itself as the fintech capital of the world. It is not in our nature to blow our own horns in such a way; the Netherlands plays a smaller role in the international financial market, but we are also forerunners in the area of internet infrastructure, security and trading. Perhaps we should be less modest.”

Because there’s no reason to be modest?
“If I’m being honest, I really don’t think we should be talking about Dutch fintech success. Ultimately, country borders are becoming increasingly relative. Even the government has a legacy, namely legislation, but that is playing an increasingly smaller role because of the EU. One example is of course PSD2, which offers great potential for fintech parties and which is a burning issue for banks. There is a growing understanding that the cards are again being shuffled. As Holland FinTech, and together with our international network, we organise a number of events that are PSD2-focused in order for solutions to be drafted for our new challenge.”

All those fintech parties in London must be a real benefit to the local economy.
“That’s true. But innovations in the financial sector don’t create more work, which sometimes makes it difficult to explain. If there are financial processes that require labour, then per definition it is inefficient and errors occur. Furthermore, jobs are being lost in banks because of innovations. But governments must commit to innovations, given that the rest of the economy benefits from them. Economic growth is largely dependent on an advanced financial infrastructure. It is not so much about jobs in the financial sector, but about an overall strong economy, one that provides employment in the long term. So I say, fintech is not for the financial industry, it is the financial industry.”